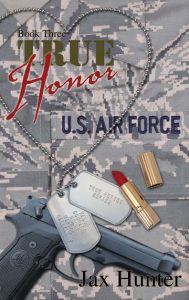 I love a good mystery/romance. This book contained both elements. I enjoyed reading more about the characters I’ve met in the first two books.

Author Jax Hunter has written a book that has not only piqued my interest, it’s held it throughout the entire book. The mystery of who killed Chris “Angel” Gabriel’s friend and the plot twists and turns in the book will test your whodunnit skills! Ms Hunter has a knack for writing military romance that has action, adventure and mystery all rolled into one! The heart wants what it wants and Ms Hunter delivers it in. Way that breaks it and puts it back together again.

Gripping and powerful! You’ll get wrapped up with Chris Gabriel and his struggle to prove his innocence in the murder of a good friend. An intriguing blend of JAG and USAF pararescue perspectives, resulting in a thrilling story with non-stop action. Excellent story!

If Mac remembered correctly, there was an old MASH episode where one of the commanders was leaving, and since all the medical personnel were in surgery, there was no one to say goodbye.

And here he was at his own hail and farewell, sitting by himself, nursing a pitcher of whatever was on tap. It would take him all night at this rate.

Lily had dropped him off, wanting to spend her last evening in California with Daniel. She still worried about her dear friend from SAR. Since Karen’s death, he’d gone into a shell—not that, to Rick’s mind, the boy had ever been all that out of a shell—and Lily wondered frequently if he’d ever be the same.

Rick didn’t want to interrupt her time with him.

Tomorrow, they’d be off to Colorado. By way of the Caribbean, where they’d get hitched. Tonight wasn’t just a going away party that didn’t happen. It was the only bachelor party he’d have.

The nerve of the Coast Guard to call for help from his teams. Tonight, of all nights.

Technically, they weren’t his teams any more. Now, they belonged to Tom Scott. Tom’s first command. He seemed to be a good guy.

As if conjured from his thoughts, the new commander appeared. Rick poured him a beer.

“Sorry about your party, Mac. I stopped by to see if you’d gotten the word.”

“It’s highly irregular for us to be meeting like this, Tom.”

“Sit. Drink. If I finish this by myself, Lily will kill me.”

Tom glanced around the room. “Where is she tonight?”

Tom shrugged off the statement, clearly not sure if Mac had meant it as a compliment or another joke. Rick himself wasn’t sure. It was hard to turn your family over to a new dad.

Rick downed another swallow of beer along with the emotion that had accumulated in his throat.

“They fight like brothers, and if you spank one of them, they all pout. But they don’t need to be micro managed, Tom.”

This was exactly why meetings between the old and new regimes were frowned upon. But Tom started it by showing up, so no one could blame him, right?

And what if they did? What could they do about it?

“You’ve done a great job here, Colonel. I have big shoes to fill.”

Again with the lump in the throat.

“The key to my success was a lack of attention to memos and paperwork, I assure you. Technically, I’m not smart enough to run a squadron.”

Tom narrowed his eyes at him and smiled.

Mac slapped him on the back. “You’ll do fine, Tom. Now, any advice on marriage?”

Tom shook his head and laughed.

“None whatsoever, sir. I’m not married.”

For the next hour and a half, until Lily returned, Mac shot the breeze with the young colonel, reminiscing about flying and missions and trying to ignore the clawing grief in the pit of his stomach.

Only a fool would miss a party thrown by the Chris ‘Angel’ Gabriel. And Will Pitkin was not a fool.

Gabe went all out. The keg was perfectly chilled, the food was amazing. Music, superb. And since only fools would miss the party, there was always an eclectic mix of people. He had the right digs, too.

If you could find them. You had to weave through downtown looking for an unmarked door wedged between a nondescript boutique and a Hallmark store. Then, if the door was unlocked—it almost always was, but if it wasn’t, you had to phone Gabe. Then, up narrow stairs to the landing, Gabe lived in the apartment on the left side of the hallway. He was remodeling the one on the right to rent out. He wasn’t independently wealthy like Cruz.

Who called it Gabe’s Ivory Tower. Technically, it was a loft. Definitely cool. The place was not especially big. Massive windows ran the length of the front from the shiny stainless steel kitchen to his efficient office. Decor was sparse yet comfortable with strange collectibles scattered about—from vintage swords to a barber pole. Something not quite normal about Gabriel.

Oh, he was a great guy. Funny, hardworking, honorable, loyal, with no end to tenacity or courage, honest to a friggin’ fault.

Even now, at three in the morning, he was set apart.

The others had either left—not before Gabe made damn sure they weren’t toasted—or they were crashed here and there throughout the house.

Gabe was the ultimate host. He came to life in a crowd. One on one, he was different. Quiet, almost broody. Awkward. High emotion took a toll on him. Wore on him somehow. Sent him off by himself for days at a time.

He now sat on the couch, with his guitar across his lap, eyes closed, oblivious to those around him. Will watched from across the room. The intricate melody he played seemed effortless. He wasn’t lost in concentration from playing. He played because he was lost somewhere inside.

The music gave the darkly lit room a surreal feel, and Will wished he could capture what he saw in words. Gabe was a throwback to heroes of old.

Nic was Batman—a heedless hero who charged in almost before looking.

Hollywood. Well, Cruz was never at a loss for heroism, but he was so over-the-top self-assured that heroism almost seemed a comedown for him. Cruz was not an easy person to explain.

Cowboy. Aw, shucks. What should you say about the kid? Never serious, smart as a whip, best climber Will had ever seen, with a streak of common sense that cut through everyone else’s bullshit. If there was one that Will might become best friends with, it was Matt.

Then there was Gabe. He was the Sean Connery version of hero. Polished, though he didn’t know it. He could lash out in violence for saying something mean about your mother. But you’d always see it coming if you were watching. Or he’d stop what he was doing to hunt for a stray cat. And, for the last Halloween extravaganza, he arrived in drag.

Girls called him tender and handsome and…

Will’s eyes drooped as he listened to Gabe’s soft song. If he didn’t move, he’d be here for the duration.

He pushed to his feet.

Gabe looked up as if he hadn’t known anyone was still there. He nodded, looked around the room at the others, then nodded again.

“See you tomorrow, Clancy. Glad you had a good time.”

Then, he closed his eyes and went back to the song.

And Will slid open the heavy steel door, inhaled the clean, crisp air, and smiled at his good fortune to have friends like these. Even if they did annoy the peewadlin’ out of him.